I wanted to tie up a few loose ends and loosen up into a regular blogging routine again. It’s been a rocky start to the semester because the boys just keep missing school for holidays and inservice days and vacation!

1. When we went to Kentucky, we took the older boys on the Domes and Dripstones tour at Mammoth Cave. It’s a neat one where you drop down 14 vertical shafts to get into the cave. It’s about a 2.5 mile walk, but the boys did great. They were very interested in the karst geology and the utter darkness in the cave. We saw the cave crickets, for an additional hoot. They were just the right age to go in for the first time.

2. In thinking about their Christmas presents, I find it very satisfying that they continue to play with and build their Legos (perhaps more than the other toys). However, they are planning to take their swim flippers with them to Louisville in a few weeks to practice in the pool. Their swimming teacher has been great to encourage them to really work on their form.

3. The public library has been a wonderful thing this winter. They boys have recently discovered books on tape and CD. They’ve also been enjoying a series called “Songs and Story” which has a Disney movie theme: the four best songs from the movie and then about 15 minutes of narration of the story. These are a HUGE hit and they make car rides go quickly. We still strongly resist devices in the car.

4. We’ve been working on improvements to the backyard. Strongly influenced by this blog awhile back, I started thinking that if we ever did get a backyard playset, it would be best if it just contained swings. We finally decided to get it, even though the park is so close, because when Porter naps and only one of us it home, it’s nice if the older boys can play on the swings in the yard. It has been unfortunate that the yard is a giant mud pit right now due to snow, being outside, and the allure of the swings. We got some mulch and the problem is resolving. Patrick also decided to get a fire pit, and that’s been a lot of fun. Yesterday he got the boys to load two trunkfuls of wood in the Honda, which they then stacked in the driveway. His verdict, “Little people don’t worry about bending and lifting. They definitely saved my back!” Now I know why my dad took us along to load wood!

5. Porter has teeth, has been trying to scoot around, can sit up, and it’s just crazy how fast it’s going by. 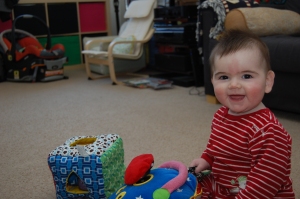 6. We had some people over to enjoy the firepit, and one of the women was holding Porter. Gilbert went up to her and said, “You can take him home if you want.” We thought he was over it, but I guess he’s still holding out hope that someone will take this baby away!

7. Seamus’s newest obsession is a calculator. He loves to type in equations and then announce the answer. We try to get him to enjoy this activity more quietly.

This site uses Akismet to reduce spam. Learn how your comment data is processed.